On Saturday 25 August, the Official Animal Rights March, organized by the group called Surge, made its way through central London. There were related marches in other cities, including New York and Los Angeles, but this particular one started at Millbank, by the Houses of Parliament, and finished in Hyde Park. It was a huge clamorous assemblage – the organizers say ten thousand people. That may be an overstatement, but at any rate the march took about twenty minutes to pass any particular point.

From such a procession, which frees attention from the usual demands of road and pavement traffic, the buildings and other places on the route can be properly observed for once and seen for what they really are. To take just the beginning and end: at first, the huge and over-detailed Houses of Parliament, seat of the earliest of all representative governments and still laboriously governing the nation without any representation at all for the vast majority of its residents, and lastly Hyde Park, notionally an irruption of nature in the middle of a great city, but in reality an exhausted tract of human playground.

And one characterizing thing about the human species as imaged in the scenes passed by the march is its addiction to war. The rallying point was the famous 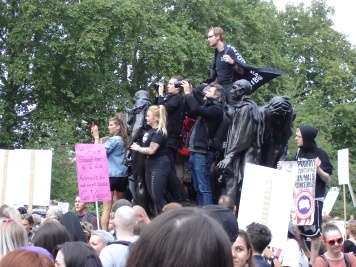 Rodin sculpture in Victoria Gardens, Millbank, titled The Burghers of Calais. These are the six dignitaries who, in legend and perhaps in fact, gave themselves up as a ransom for their city when it surrendered to the English army of Edward III in 1346. A fine image of heroic suffering, then: more generally, an incident in war – the Hundred Years’ War, in fact, which my dictionary of history describes as a “series of wars, punctuated by periods of peace or truce”.

And just such a description of human history as a whole was evidenced along the route which the march took through London. Leaving the burghers of Calais, it next went past the statue of Winston Churchill as war leader in Parliament Square; then on into Whitehall, with its fine Cenotaph built to honour the dead of the Great War; then past the new memorial to the women 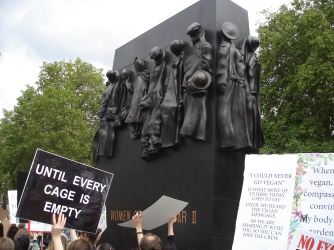 who served in World War Two, and the statue of Earl Haig, Commander of the British Army in France in 1915-18; then, the Crimean War Memorial in St James’s; then, just before Marble Arch, the memorial to Bomber Command; and finally, at the southern entrance to Hyde Park, the memorial to the Duke of Wellington’s victories in the Napoleonic Wars, with its colossal statue of Achilles, naked except for a sword and shield, a summary of man as mere belligerent. And as if to affirm this story of the perpetual merry-go-round of war, the statue was made from the enemy’s cannon.

Most of these memorials are impressive and even moving records of courage and self-sacrifice: seen, that is, from within the species and taking it as given. Seen from without, however, they’re simply a shameful record of delinquency, the evidences of a uniquely disorderly species.

Is there some connection between this war-making and the affluence which is the other most patent characteristic of these streets of central London, with their clubs, restaurants, pompous hotels, and luxury goods displayed in windows? It was a proposition put by the Quaker and zoophilist Thomas Woolman in his Plea for the Poor (1774): “May we look upon our treasures and the furniture of our houses and the garments in which we array ourselves and try whether the seeds of war have any nourishment in these our possessions or not.”

Doubtless there is such a connection, but much more directly and essentially this affluence is the plunder from a war which is only not recognised as such because it’s simply a way of life. This is the war which Rachel Carson spoke about in her book Silent Spring (1962): “man’s war against nature”. In her book she habitually uses that phraseology: “our war against the insects”, “war on blackbirds”, “all-out chemical war on the gypsy moth”. She writes that “the chemical war is never won, and all life is caught in its crossfire,” and she summarises it all as humanity’s “relentless war on life”. Rachel Carson did not mean these expressions for images, but for fact. She showed, indeed, that much of the post-war insecticide novelties of the 1940s and 50s were taking forward research pursued during “man’s war against his own kind” – as memorialized in Whitehall: “post-war” because, thank God, there are indeed “periods of peace or truce” between human wars. There is no truce, however, in the war against nature: a few sanctuaries, perhaps, but peace never.

Rachel Carson was writing about only one branch of that war, the destruction of the lives that compete for food with or otherwise annoy human beings. But all our exploitation of animals fits into that same war and the war mentality. Edward III may have spared the lives of the six burghers, but he appropriated their city and staffed it with Englishmen. Likewise, but more ruthlessly and ambitiously, we have appropriated the lands and lives of all the other species. Humanity is everywhere an army of occupation, and its exactions are there on show along St James’s and down Piccadilly: the leather goods, the cashmere shop, the charcuterie, the cheap burgers and, by way of contrast, the pricey Ritz Hotel menu: Veal Sweetbread (£28), Native Lobster (£52), Roast Bresse Duck (£38), etc. You’ll observe in that menu how a habitat becomes a ‘provenance’ to interest the consumer, a sort of gourmet’s trophy. 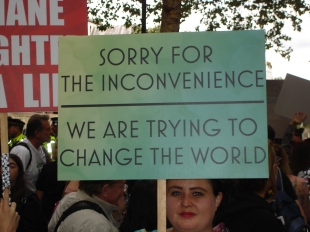 summarized in sayings and chants. “We are trying to change the world”: yes, and not in favour of some impossible utopia. On the contrary, the change would be to turn it, as the novelist T.H.White said, “right back into the real world, in which man is only one among innumerable other animals” – no longer their conqueror and scourge, an anomaly in life’s history, but their co-tenant. “With us, not for us”, one placard said. After all, it’s certain that we shall have to unlearn the habit of war or else finally destroy ourselves, and here’s the place to start: “Peace begins on the plate”, said another.

Of course if we do destroy ourselves, it might liberate the other animals in a more lastingly satisfactory way.

The Hundred Years’ War is described as quoted in A New Dictionary of British History, ed. S.H.Steinberg, Edward Arnold, 1964.

John Woolman’s A Plea for the Poor, or a Remembrance and Caution to the Rich can be read here: http://www.richardporowski.com/documents/books-papers/john%20woolman%20-%20a%20plea%20for%20the%20poor.pdf  The quotation is from Chapter 10.

T.H.Whyte wrote about “the real world” in a letter of December 1940, quoted by Sylvia Townsend Warner in her introduction to The Book of Merlyn, Fontana, 1983, p.18 (slightly altered here to correct a mistaken preposition). The theme of Whyte’s story of Merlyn and King Arthur is how to cure humanity of the habit of war. The book is discussed in this blog on January 1st 2018: https://voiceforethicalresearchatoxford.wordpress.com/2018/01/01/two-merlins-and-their-tasks/