Among the countries engaged in work on Covid-19 is the Kingdom of Belgium. “Research in Belgium uses animals to find effective treatments for Covid-19”, announces the European Animal Research Association (EARA), an organisation which promotes awareness and acceptance of vivisection in EU member states, much as UAR does in Britain. The animals in question include mice, rabbits, and llamas. Monkeys too, although the Belgian institution that has been using them in its work, VIB-UGhent (Vlaams Instituut voor Biotechnologie at the University of Ghent), manages to publicize its “important milestone in the development of a Covid-19 drug”, and specifically “the moment we observed virus neutralization in these experiments”, without mentioning animals at all.

The EARA aims to induce such organisations to be less bashful. In fact a few years ago, when it wished to counter unfavourable publicity on World Day for Animals in Laboratories, the EARA published on that day a collective declaration of intent by Belgian science institutions to be more open (or at least publicity-conscious), on the model of the UK’s Concordat on Openness. VIB was a participant, perhaps without much enthusiasm. At the time (2016), the EARA said it had chosen Belgium for the purpose because “if we could successfully carry out this project in Belgium, then it could be reproduced anywhere.” That sounds like a chauvinist jest, but the thinking was that Belgium, with its strong regional identities and three official languages, would be unusually resistant to collective action.

Perhaps also in mind was the fact that the country does not have a strong tradition of concern for animals to make sense of such distractions from the business of research. It had no dedicated animal welfare law until the 1929 Protection of Animals Act, in which vivisection occupied just one article. Yet already Belgium was notable enough for its practice of animal research to be apostrophized by one of its most famous citizens, the artist James Ensor (more of him in a moment), as a “tormenteur d’animaux”. Even now there is no dedicated anti-vivisection grouping in Belgium, though since 1992 the excellent organisation GAIA has included animal research in its campaigning. But as a practitioner of animal research Belgium is not much less active than the UK in proportion to its population. And with about 2.5 % of the EU’s population, Belgium accounts for about 5% of the animals used in EU research.

Anyway, that 1929 Act had been preceded by several years of contention, to which, as we’ve seen, James Ensor had vigorously contributed. As a highly unorthodox artist, a pioneer of expressionism, Ensor had suffered many years of rejection and neglect, but finally he had become a figure of national celebrity, had even been created a Baron by King Albert. This recognition to some extent tamed Ensor; in particular, he destroyed all the copies he could recover of his savagely satirical print featuring Albert’s predecessor Leopold II as Roi Dindon (i.e. ‘King Dolt’). But his rage against disrespect of nature, and in particular against animal research, was never mollified, or gentrified as to its expression. In an interview at that period, one of those formulaic interviews which set the celebrity to fill in their favourite this and most regretted that, Ensor’s answer to “Ce que je deteste le plus” [what I hate most] included among other things “les vivisecteurs gavés de cruauté, bouffis de suffisance et d’insensibilité profitable” [vivisectors stuffed full of cruelty, bumptiousness and lucrative insensibility.] Incidentally, that French verb gaver, when used about animals, means to force-feed; it’s borrowed into the English of the animal-research world as ‘gavage’, presumably to help camouflage a very ugly procedure.

But Ensor’s most dramatic intervention in the controversy was his painting of 1925 titled Les Infâmes Vivisecteurs (usually translated as ‘The Vile Vivisectors’, but ‘shameful’ might be more apt). He was now in his sixties, and had generally turned away from painting in favour of writing and music. His greatest works were done, and it’s an indication of his earnestness that he not only undertook this sizeable picture (62 by 80 cm), but made a second version of it four years later, eloquently unaltered by the disappointing law of 1929.

With its chinoiserie patterns, grotesque and masked figures (including skeletons), and crudities in the tradition of the satirical cartoon, Les Infâmes Vivisecteurs is wholly characteristic of its artist. Even the presence of the artist himself (top right in hat) is a familiar trope: in one gruesome painting, The Dangerous Cooks (1896), Ensor’s own head is being served up to a group of critics, two of whom are spitting or perhaps being sick. But whereas these various elements often create baffling results – one modern critic has justly called Ensor’s art “always compelling and often utterly mystifying” – Les Infâmes Vivisecteurs has a strong, even blatant programme.

Reading from the left, a skeleton, on whose cranium a bird is spitting, bribes a compliant priest to endorse the practice which is dramatized under their hands by the convulsed 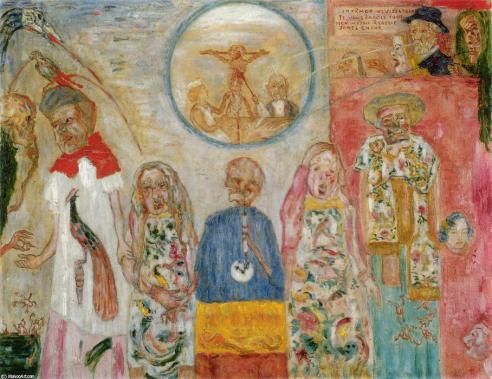 frogs. The priest, upon whose head the same bird seems to be defecating, is with his other hand gripping the arm of a woman, presumably one of his browbeaten flock, herself consequently being spat upon. Her other arm is held by a skeleton doctor preparing a syringe. Next comes an even more obviously unhappy woman (or is she wearing a mask?), whose wrist is being held by a second skeleton.

These five figures seem to be ranged in contemplation of something out of the picture, so perhaps the roundel at the top is being imagined as a mirror reflecting what they watch. Here, anyway, a physiologist is giving a class, showing the inner workings of a dog whom his assistant is helpfully disembowelling. Ensor was not a believer, but he frequently used the crucifix as an image of unjust suffering, sometimes putting himself there, sometimes Christ; here it’s the lab animal.

Finally, at the top right, Ensor himself and three masked heads express their indignation by spitting at the repellent scene or its mirror image. “Infâmes vivisecteurs,” Ensor is saying with characteristic vehemence; “je vous crache tout mon mépris à la face” [I spit with all my scorn into your face].

Skeletons have always been seen, naturally enough, as disagreeable reminders of mortality. They frequent Ensor’s pictures as mockers of human pretensions and comforts. They are present at the fun of carnivals, or lounge in bourgeois sitting rooms. One of them waits patiently, with scythe to hand, for some doctors to finish treating their 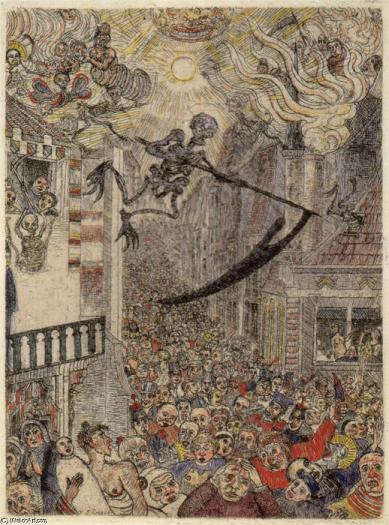 patient. Perhaps most eloquently of Ensor’s outlook, in Death Pursuing the Human Herd the skeletons stampede an endless crowd of panicking humanity along the narrow streets of Belgium. In Les Infâmes Vivisecteurs the skeletons appear as sinister sponsors of vivisection, and at the same time reminders that medicine cannot, whatever sacrifices are imposed in its cause, save humans from death, though it may postpone death, a point that is perhaps being hinted at in the doctor’s time-piece.

Well, why not at least endeavour to postpone it, then, at any cost (to others)? Ensor’s answer is implied in the mood of shame, anxiety and defeat created in the painting. That mood is all the more poignant for the futile gaiety of the clothing, with its forlorn celebration of colour and natural forms. These are fallen people, a fallen society.

It’s an answer which, in its heroic form, was famously incorporated by Homer (if it was Homer) in the Iliad, millennia ago. Sarpedon, the king of Lycia, is urging his friend and fellow-warrior Glaucus into battle against the Greeks, and he gives two reasons for them to hazard their lives in this way. One is that to behave high-mindedly is the proper counterpart of their privileged status in the world; the one vindicates the other. They had an obligation to be, as Alexander Pope translated it, “The first in valour, as the first in place.” And the second reason is that to duck the battle doesn’t after all mean getting to live for ever; otherwise, as Sarpedon candidly admits, he himself would forgo the fame and stay safe at home. The best, the only wise, course is therefore to act reputably, “Brave though we fall, and honour’d if we live”.

A species could do worse than make that its motto. Certainly we may hope, and indeed strive, to stay alive, knowing as we do that eventually we must fail; what we mustn’t do is gain time dishonourably by making others endure the strife for us. That’s the infamy which Sarpedon exhorts Glaucus to spurn, and which Ensor angrily showed that his own contemporaries, so far from spurning, were thoroughly implicated in, as their successors still are.

The EARA press release about Belgian research, which incidentally also provides a link to a map showing all such Covid-related animal research in the world, can be read here: https://www.eara.eu/post/research-in-belgium-uses-animals-to-find-effective-treatments-for-covid-19.  Its account of the World Day counter-publicity is here: https://www.nature.com/articles/laban.1025.pdf?origin=ppub. VIB’s own announcement is here: https://vib.be/news/vib-achieves-important-milestone-development-covid-19-drug

Quotations from Ensor himself are taken from the Les écrits de James Ensor (Brussels, 1921) p.131, and Ecrits de James Ensor de 1921 à 1926 (Ostende-Bruges, 1926) p.6. This second reference is for the interview, which may have been a device of Ensor’s own, rather than a genuine exchange. Some of the answers and indeed the questions are eccentric and fanciful, though the answer quoted is serious enough.

The quotation about Ensor’s art comes from a piece in the Royal Academy’s RA Magazine for Autumn 2016 by Michael Prodger, titled ‘James Ensor: a man of many masks’, and accessible here: https://www.royalacademy.org.uk/article/james-ensor-man-of-many-masks. Ensor’s later pictures are generally not much discussed, but Les Infâmes Vivisecteurs is reproduced and briefly spoken about in Ulrike Becks-Malorny’s Ensor (Tashcen 2016) pp.87 and 89. She also mentions the second version of the picture. But of course there are very many books about Ensor, who is now considered one of the greatest and most original of the modernists.

The Homeric episode of Sarpedon and Glaucus comes in Book 12, lines 310-28.