A common feature of the nativity scenes which have been heralding Christmas in churches and elsewhere, and which, now the feast is more or less over, are looking (but perhaps this is just a secular view) touchingly forlorn and ineffectual, is the small audience of animals. These animals aren’t scriptural. That is, they aren’t mentioned in the gospels, although the talk of a “manger” implies them, and the subsequent long journey suggests the presence of a beast of burden. It’s understandable that the gospels don’t mention them, because Christ came into the world, so Paul says in his letter to Timothy, in order to save sinners, and there’s no suggestion in the Bible, or in reason, that animals are capable of sin. Rather, they are in a necessary state of grace or, in secular terms, of propriety: absolutely dutiful to their species patterns, in a way that we don’t know how to be to ours, if there even is one. Perhaps this is in fact why the animals are there, dignifying all those cribs: in their calm sagacity they instance the redeemed state which the nativity of Jesus is said to promise to humans.

I’ve often felt as much when looking at the painting of that scene by Veronese, which hangs in Oxford’s Ashmolean Museum. It’s a beautiful picture, full of animation and portent. 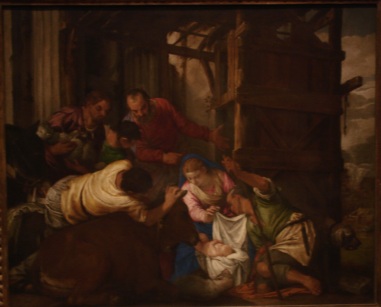 The composition surges down from left to lower right, from the lamb in a shepherd’s arms down to the dog keeping the doorway. And this sweep of life is anchored by the great ox in the foreground, watching the child and tolerating the shepherd who half-reclines upon him as if this ox was a sofa. Right in front, a recumbent lamb lifts its head in acknowledgement of all this activity.

Veronese had a particular feeling for animals. He liked to have them in his pictures; especially he liked to have dogs there, whether it was their proper place or not. One of the reasons why the Inquisition summoned him, in 1573, to explain his painting The Last Supper was that he’d put a dog right in the foreground. Rather than remove the dog, Veronese changed the picture’s ostensible subject to Feast in the House of Levi. And so in the great stonework frieze of artists, composers and writers which surrounds the Albert Memorial in Kensington Gardens, London, Veronese is shown, among his busy fellow-professionals, looking downwards at a dog, upon whose upraised head his hand affectionately rests.

But recently I’ve realised that the lamb in the foreground of Veronese’s painting must in fact be trussed, and the one at the back too. In fact one can just make out the cord. Their presence must therefore be of the sort suggested in Christina Rossetti’s poem ‘In the Bleak Midwinter’ (now familiar as a carol): “What can I give Him, poor as I am? / If I were a shepherd, I would bring a lamb.” These lambs are sacrificial gifts, then; pastoral care is at an end for them. No doubt their presence in the picture is partly a reference to the sacrifice Jesus is to make of himself as the ‘Lamb of God’. At any rate, the Peaceable Kingdom element of this and other such nativity scenes is illusory. Rather, we’re reminded that although animals don’t need saving from sins of their own, they do need saving all the same. And who is to do it for them? Or as C.S.Lewis asks in his book The Problem of Pain (1940), “what shall be done for these innocents?”

No doubt it’s legitimate to see animals (in the way some Christian writers now do) as implicated in the ranks of the poor who were peculiarly the objects of Jesus’s concern. And in so far as Jesus urged the powerful not to abuse their power over such people, or not to use it at all (“go, sell what you possess and give it to the poor!” Matthew 19:21), he did all vulnerable subjects good, including the animals. So the animals round the crib might indeed have been looking to him in some hope, even if his help were to come collaterally, a by-product only of his given mission to humans as described by Paul.

The trouble is that a sizeable part of animal suffering has nothing to do with humans, and cannot therefore be put right merely by human forbearance. As C.S.Lewis says in that same book, “The intrinsic [i.e. as opposed to gratuitously added] evil of the animal world lies in the fact that animals, or some animals, live by destroying each other.” It’s true that in pre-scientific times this evil could be seen as part of the human Fall. So John Milton wrote that, following the lapse of Adam and Eve,

Beast now with beast ‘gan war, and fowl with fowl,
And fish with fish. To graze the herb all leaving
Devoured each other … [Paradise Lost, X.710-12]

But we can hardly take that view now, knowing that strife was a characteristic of the natural world long before humans came onto the scene and made it worse. (This is to say nothing of the sufferings arising from the struggle for limited food and space, which have similarly predated humans but been immeasurably aggravated by them.)

Like Veronese, C.S.Lewis had a strong feeling for animals (he was especially vocal against vivisection). He could not be satisfied with any picture of the world which did not accommodate them. This is obvious enough in all his fiction, but it was true also of his theology. And therefore he proposed a most moving and ambitious extension to the orthodox Christian theology of the human Fall and Redemption. He presents it mainly in the ninth chapter of The Problem of Pain, the chapter called ‘Animal Pain’.

Long before humans appeared, Lewis says, there must have been an earlier fall, a “Satanic corruption of the beasts”, or at least a corruption of “the animal world” in which the beasts had to live. From then on, violence and the squandering of life characterized nature’s economy, producing the Darwinian scene which we now know and which the philosopher of animal ethics Oscar Horta has called “natural hell”. When humanity first came into this scene, suggests Lewis, it had “a redemptive function to perform”: that is, part of its special commission in the world was to be the “Christ” (= messiah) to these earlier animals, and to rescue them from their fall and its consequences, just as the Christ whom the animals made room for in their stable was sent to do for humans. But so far from redeeming nature, of course, humanity itself fell, and has subsequently taken a clear lead in predation, so that now, as Lewis wrote in his essay ‘Religion and Rocketry’, “Man destroys or enslaves every species he can”.

Lewis could not be dogmatic about this improvised theology. He offers it as “guesswork … a reasonable supposition” – “reasonable” in that he himself accepted the scriptural story upon which he builds it, at least as having the sort of provisional truth that mythology provides. But if we accept it for the moment in that spirit, see what an extraordinary flood of light it casts upon both the promise and the delinquency of man: on one hand, the glorious hope that was vested in him, as the being come messianically “to restore peace to the animal world”, for surely if all had gone right “he might have succeeded in doing so to an extent now hardly imaginable”; on the other hand, the treachery of one who must now be understood not simply to have casually misused and exploited the fellow-creatures he found himself among, but in doing so to have broken a divine trust and made a holocaust out of the civil dissension which he was sent to remedy. (You can see Lewis telling this same story, and putting right the tragedy, in his Narnia stories, with – not by chance – a lion for his divinity.)

But you don’t need to accept the Christian setting in order to recognize this picture. It’s there as fact in the world’s history. That “corruption of the beasts”, when the carnivorous short-cut to protein was first taken, is certainly somewhere there in the record. The palaeontologist Richard Fortey, in his Life: an Unauthorised History, dates it “a geological second” into the Cambrian era, and sees it (like Milton and Lewis in their different schemes) as the loss of the world’s innocence: “The era of … peaceful coexistence among bacteria and algae had passed from the Earth, and the hierarchy of power has never subsequently been forgotten.” And whatever we may think the Bible means by giving man “dominion” over the other animals [Genesis 1.26], it’s certain that we do have dominion in fact. We have both the mind and the power to know and to do better than fallen nature. Our history, especially in the last four hundred years or so of technical progress, shows us energetically using these faculties to serve our private interest as a species. Meanwhile all the other denizens of the living world, except the few we choose to pet or admire, wait for help which doesn’t come.

This is the true poignancy of those animal onlookers round the crib.

A  more elaborate account of these ideas, as they appear in the poetry and fiction of C.S.Lewis, and in the present-day ethical philosophy of Oscar Horta, is published in the Oxford Magazine no.363, and can be read on VERO’s web-site at http://www.vero.org.uk/HortaAndLewis.pdf

The photograph of the Frieze of Parnassus is used by permission of René and Peter van der Krogt (http://statues.vanderkrogt.net). The sculptor of that part of the frieze was Henry Hugh Armstead. No image of Veronese’s Adoration of the Shepherds is available at the Ashmolean, and I have therefore used my own, which probably breaks copyright – for which I apologize.