The leading story in biomedical science at the moment (where not?) is COVID-19, the new variety of coronavirus – new to humans, that is – which has evidently been accompanying us as a fellow-passenger on our restless tours round the world. It’s a zoonotic disease; the animals gave it to us, and where more probably and more justly than at an animal market like the one in Wuhan, where human contempt for other creatures is at its most visibly disgusting? These markets crowd the living, dying, and dead together – farm animals, marine animals, snakes, civets, foxes, dogs, donkeys, destined for food or for traditional ‘medicine’ – in a hell such as Hieronymus Bosch might have painted.

We surely deserve whatever they can do us of harm in such a setting. Even a researcher at the Wuhan Institute of Virology seemed to be thinking so when she was reported on the Sina.com web-site (and roughly translated) as calling the virus “a punishment for uncivilized living habits of human beings by [towards?] nature”. ‘Even’, I say, because of course the burst of scientific activity prompted by the epidemic has itself swept a 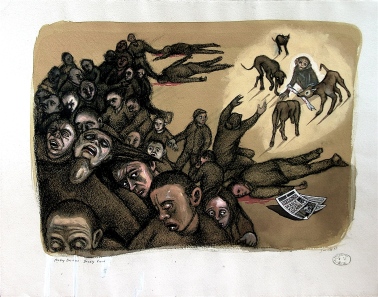 crowd of other animals into human un-mercy. This same laboratory in Wuhan has already, we are told, “completed the establishment of mouse and non-human primate models”. Meanwhile scientists in the USA are using data provided from China to synthesize live virus and then “study it in animals”. [Science, 17.1.20] We humans can’t be expected to suffer alone.

The Chinese government has now put a stop to the trade in wildlife for food, and this most welcome ban seems set to be permanent, unlike the one introduced during the outbreak of the SARS virus a few years ago. (There’s a Care2 petition for a similar ban on wildlife markets in the neighbouring countries, Myanmar, Thailand, and Laos: see the link in the notes below.) But the disfavour hasn’t so far been extended to animal-related traditional medicine. One particularly wretched instance of this, though not involving exotic animals, is the manufacture of ejiao from collagen in donkey hides. The growing popularity of this supposed blood tonic has been “spurring new studies of donkey biology”, according to the journal Science, the aim in particular being “to speed their reproduction . . . and expedite growth.” [13.12.19] Here’s the science of animal research, then, continuing to serve and promote the ruthless industrialization of farming – and the donkey trade really is ruthless from birth to death of its unhappy victims.

Science says that publications on the biology of donkeys now appear at about seven times the rate of twenty years ago. Not all of this burgeoning research is being done in Chinese institutions, but of course much of it is. In fact a rapidly increasing proportion of all internationally recognized science comes from China. Yet ejiao itself seems to have been subjected to no serious clinical assessment. There’s an ugly mismatch here: high-tech science and ancient habits of predation. Of course, something of that mismatch is present in every animal-food business and every animal research laboratory throughout the world. Besides, there’s a sound caution against censuring other ways of life (the Chinese themselves readily call such criticism colonialist or racist): alien traditions and values, even superstitions, should have our respect or at least polite acquiescence – so it is liberally said. Agreed! And therefore let’s extend the same amenity to the traditions of animals and their values, in particular their traditional attachment to staying alive.

One peculiarly human tradition habitually imposed upon animals in the laboratory is the drinking of alcohol. I had thought that this category of research, alongside studies in tobacco, was prohibited in Britain, but in fact only “developing or testing alcohol or tobacco products” is ruled out by the Home Office; where the research is aimed at “investigating disease or novel treatments”, permission may be given. And since alcoholism almost certainly is a disease or at any rate a ‘disorder’ (the common scientific name is Alcohol Use Disorder), and is besides, according to Science, “a component cause of more than 200 diseases” [22.6.2018], such research does indeed go on here. A report in the Independent online newspaper at the end of last year instanced some of it, including studies at Oxford University into the role of alcohol in birth abnormalities.

Alcoholism is undoubtedly a tragic condition. ‘Compelled to drink: why some cannot stop’ is the heading to a Science news story introducing some recent research; it well suggests the helplessness of people in the grip of addiction [22.11.2019]. But the words are ambiguous and misleading, perhaps knowingly so in order to make a bigger splash. The heading should be ‘Why some mice cannot stop’; it’s mice that are being “compelled to drink” in the research itself (which is fully reported later in the same issue). So the human relevance is purely speculative, but readers are encouraged by such wording to elide for themselves the species gap, and so to give this research a value it cannot expressly claim. Even the researchers themselves (Dr Cody A. Siciliano, of Vanderbilt University, and others) speak of “a binge-drinking experience in male mice”, as if the conditioned addiction suffered by the mice is identical to the human behaviour evoked by the word ‘binge’, and can therefore be an adequate surrogate for it in the laboratory. Science’s own introductory gloss on the research shows the sleight of hand concisely: “People drink to excess for a variety of reasons, but as the animal model of Siciliano et al demonstrates, not all heavy drinkers become compulsive.” Demonstrates! Human and mice minds, it seems, are simply interchangeable.

To test the strength of their compulsion, the mice in this study were given disincentives or “punishment” (a curious word to use), consisting in “increasing shock amplitudes”. The “compulsive animals”, we’re told, “showed a robust insensitivity to punishment”. There’s an unpleasantly sadistic suggestion in that euphemistic “robust”. And of course all these animals, “compulsive” and otherwise, making their choice of soft drink or alcohol from “lickometers” in the miserable ‘Skinner boxes’, were in fact drinking themselves to death, since that was the necessary end-point of their part in the research.

A similar study using rats was featured in Science a few months earlier, with much the same optimism, but there was at least this concession: “The value of animal models for understanding human psychiatric disorders is increasingly criticized because preclinical studies often produce false-positive results that do not translate to the clinical situation.” [22.6.2019] Often enough in other areas of biomedical research too: this must partly explain why so much clinical research not only goes unpublished but, in the USA, is not even posted as required by law on the federal database ClinicalTrials.gov. Nor is it only translation from animals to humans that causes problems. An article in Science last month looked at the unpleasant scene of ecotoxicology, the study of new chemicals in the environment. Here, apparently, it’s “now widely accepted that a high proportion of published research is not reproducible”, so much so that there’s talk of a “reproducibility crisis” [24.1.2020]. One of the reasons given is especially wretched: the researchers have chosen unconventional animals for their test subjects, and the results don’t successfully cross to the more standard species.

Other reasons are of a kind which may affect any type of research. There’s bad experimental design, for instance: some of the research which actually is posted on ClinicalTrials.gov has to be removed because it fails to satisfy “basic quality-control standards” [17.1.2020]. Then there’s wishful thinking in interpretation: that is, bias in favour of the chosen hypothesis.  There’s even falsification of data. A recent paper on ‘threat learning’ in mice (another experiment based on pain aversion: i.e. electric shocks) has had to be retracted because the lead author made up some of the data [31.5. and 20.12.2019].

These varieties of flawed experimentation may, as I’ve said, affect any research, wasting work and resources and other people’s attention; but in the case of animal research lives too are being – I won’t say ‘wasted’, since it implies that good research is a proper use of them, but negligently squandered. And unfortunately even diligent and authoritative research may be negligent in the sense of being unnecessary. The ecotoxicology survey comments on this abuse with justifiable severity:

Did we need 250 papers to tell us that ethinylstradiol [a common oestrogen medication] poses a risk to fish? Everything we need to know to protect the environment was communicated in the first half a dozen papers.

Perusing the issues of even such an authoritative journal as Science, I conclude that this must be the most common animal-research flaw of all: needlessness.

As the ecotoxicology article suggests, Science is quite willing to publish material critical of animal research as practised, though in general the methodology is taken for granted, and huge numbers of animals (most of them mice) are accounted for every week in its biomedical papers. On environmental subjects, including wild animals under threat, the journal is committed and informative. But of course it’s species-minded. Thus an editorial review of ‘What’s coming up in 2020’ speaks favourably of “efforts to rein in loss of species”, but notes with equal approval the way new gene-editing techniques are “reinvigorating the beleaguered field of xenotransplantation, which aims to surgically replace human organs or tissues with ones harvested from animals such as pigs.” [3.1.2020] I needn’t comment on the slap-dash callousness of those last six words. Even in Science’s sympathetic coverage of the wretched plight of the donkeys in China, the headline concern is with an “existential threat” and “crashing populations”, rather than with the essential wrong.

To think in this way conveniently cheapens the lives of animals that belong to durable species populations, notably the ones whose numbers we ourselves keep artificially high. But humans themselves are just such a species. We make an exception of them which is merely self-interested and has no foundation in science or even in philosophical ethics. A declaration by UNESCO in 1997 stated that it was the human genome that secured “the fundamental unity of all members of the human family as well as the recognition of their inherent dignity and diversity.” But in fact that genome overlaps extensively with other species and varies in ways that make the declaration sentimental nonsense. So much is acknowledged in a Science paper headed ‘Biotechnologies nibbling at the legal “human”’: “there is no defined ‘human genome’ that can be used as an easy way to determine humanity.” And as the title suggests, there are other developments that call our sense of separateness into question: “new research techniques, such as xenotransplantation and human/non-human chimeras, challenge the animal-human species divide.” [20.12.2019]

Here, then, is a prompt to revise our relations with other animals. Yes, distinctions of species are real and intelligible, a necessary academic ordering, but they are none of them absolute, and they should have no bearing on entitlement to life and liberty. As for the human/other-animals distinction, it’s a fiction. Once we admit as much, our ethics can start to go right. Unfortunately the authors of the ‘nibbling biotechnologies’ paper shy away from the truth they’ve uncovered. I can’t quite make sense of their final sentence, but its mixture of sentimental appeal and determination to preserve our ancient rights is patent enough: “the concept of membership in the hazily bordered human family can serve as a useful source for the delimitation of the ‘human’”. Science and other business as usual, then.

Most of the references are to Science, an international peer-reviewed research journal which also publishes news and editorial features; dates for the issues cited are given in brackets.

The Home Office rules governing research into alcohol use are published in Guidance on the Operation of the Animals (Scientific Procedures) Act 1986, HMSO 2014, p.50.

The piece about UK alcohol research published by the Independent online in December 2019 can be accessed here: https://www.independent.co.uk/news/uk/home-news/animal-experiments-test-us-uk-mice-fish-alcohol-nicotine-a9259776.html

UNESCO’s Universal Declaration on the Human Genome and Human Rights can be read here: http://portal.unesco.org/en/ev.php-URL_ID=13177&URL_DO=DO_TOPIC&URL_SECTION=201.html

The picture, Monkey Business: Deadly Virus, is by the artist Sue Coe, who is featured in this blog on 25 September 2017: https://voiceforethicalresearchatoxford.wordpress.com/2017/09/25/the-vegan-animals-manifesto-by-sue-coe/