The starting place for this year’s Official Animal Rights March in London was the huge Achilles statue in Hyde Park – that triumphalist image of man the combatant, protecting his own interests with his left arm, while savaging the interests of others

with the his right. Against this obsolete rhetoric of Richard Westmacott’s 33 metric tons of cannon-bronze (the type of rhetoric which may yet inspire humanity to bring the whole house of life down into ruin), came together on 17 August a counter-eloquence of non-violence, asserting the right of other species not to be minced by the human sword.

And certainly the rally and the march were powerfully and variously eloquent: banners and placards (“The only thing we need from the animals is forgiveness”, 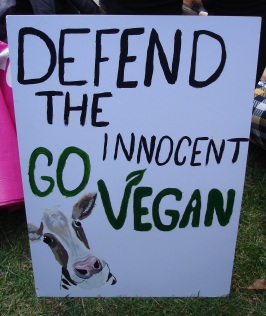 “I’ve come from Lisbon looking for protein”, “You kill them and their flesh kills you”, “Suck your own tits!”); chants and other noise; and that symbolic mass movement through the streets towards Parliament Square – the organizers said 12,000 people, an over-estimate possibly, but certainly many thousands. Speeches too, of course, and these were sign-languaged: translated into a repertoire of gestures and looks not only beautifully expressive in themselves, but demonstrating that words, so often preened upon as our special human property, are not the sum of language but one variety of language only. In fact signing is a reminder of our heritage of animal communication, more generally of what ought to be our animal solidarity. And some of the signs are especially moving and beautiful: most notably on that Saturday the sign for ‘freedom’, the fists opening out forwards into spreading hands, as one might liberate a bird or preferably all birds.

Well, eloquence then. But as Prime Minister Lloyd George said exactly one hundred years ago at the time when he and others were trying to make an end of war at the Paris Peace Conference (Lloyd George was one of the pedestaled figures that overlooked the march when it reached its destination in Parliament Square), “the finest eloquence is that which gets things done.” So what does an event like this get done?

Of course it’s a massive mobile advertisement for veganism, touring the centre of a crowded metropolis: veganism the diet, but more importantly, as both the placards

and the antiphonal chant (“Go vegan: for the animals”) insisted, veganism as a political movement. So, some persuasion gets done at least.

Also this time round there was a more definite project: a rehearsal for the ‘Animal Rebellion’ event in October, when animal rights will join the Extinction Rebellion movement (in which, of course, it’s a crucial element, whether acknowledged or not) in a large-scale disruptive demonstration. The assembly at the Achilles statue was therefore given advice on the philosophy, practice, and efficacy of peaceful direct action. (Gandhi, its great exponent and therefore the precise opposite of Westmacott’s Achilles, was another of the figures overlooking the crowd in Parliament Square.) The rehearsal itself was to consist in a blockade of traffic in and out of Trafalgar Square.

However, when the march arrived at the Square, all the traffic had already been closed off for the march, and there was nothing to blockade. In such ways a liberal society absorbs the blows of criticism and simply springs back into shape. And a march like this one does demonstrate, rather disconcertingly, how liberal British society is, so far as it goes. All those main roads through London closed off to let its critics pass clamorously through at their own pace! But then, as a glance round the world makes painfully obvious, this liberalism is not natural to human government; it has had to be laboured for and won here, in past centuries, by just such shows of dissent and demand as this one. In fact it illustrates their necessity and efficacy: they do get things done.

One of those political forerunners is just now enjoying bicentenary attention: the great gathering in St Peter’s Fields, Manchester, in 1819 to demand political reform, a gathering which was violently dispersed in the ‘Peterloo massacre’. (The name ‘Peterloo’ was an ironic allusion to Wellington’s victory at Waterloo four years earlier, an achievement which the Achilles statue commemorates.) Though a disaster at the time, this event was part of the run-up to the Great Reform Act of 1832. And that legislation began a sequence of electoral reform which reached its natural conclusion nearly 100 years later with the Equal Franchise Act of 1928, giving the vote to all women and men over the age of twenty one (over eighteens were enfranchised in 1969).

And there we came to a stop, leaving the great uncountable majority of UK residents completely unrepresented. In fact it seemed miserably apt, when the march was

clamouring its way past all the government offices in Whitehall, that those great rooms were empty and the windows blank, and, in Parliament Square itself, that large parts of the buildings were sightless behind scaffolding shrouds. At present, politics needn’t take notice of animal interests, and usually don’t.

Even so, it must be there, in Parliament Square, that a start is made, and animals begin their own far harder journey towards liberty through political representation: not, as at present, indirect representation by means of the good will of the humans who do have their own delegates there, but direct representation of some kind. As Robert Garner has argued recently in the journal Contemporary Political Theory, “a democratic polity should take account of animal interests, not because a substantial number of humans wish to see greater protection afforded to animals, but rather because animals themselves have a democratic right to have their interests represented in the political process.”

By way of illustrating that distinction, here is the government’s response last month to a parliamentary petition asking for theft of pet animals to be made a specific criminal offence. “We acknowledge the emotional trauma which the theft of a much-loved pet can cause”, it caringly states, but no reform is needed because existing guidance on sentencing already takes into account this “emotional distress that the theft of personal items such as a much-loved pet can have on victims.” There is no mention of the interests of the animal; it is simply assumed that the humans are speaking for themselves, animals happening to be the focus of their interests in this case.

In short, it’s “government of the people, by the people, for the people”. But Abraham Lincoln’s fine and famous phrase is no longer adequate, if it ever was. That chant “for the animals” needs bringing into it. Lincoln spoke of a “new birth of freedom” in “this nation”. But the animals are as much a part of whatever nation they live in as the humans are, more so by seniority; they are at least as much affected by its government; and therefore they are equally entitled to their own voice – that is, a voice dedicated to their interests alone – in that government’s decisions.

How to manage that is, of course, a difficult question, but let’s at least insist on the principle now. As the quoted article by Robert Garner shows, it’s making some headway in academic political thinking: indeed there is a peer-reviewed online journal titled Politics and Animals. But by a more popular audience the idea is likely to be thought absurd or threatening. Going back to the Peterloo anniversary, one of the aims of the Memorial Campaign set up to mark this anniversary year is “to crowd-source ideas for radical improvements to how democracy is conducted”. For this purpose it has set up a web-site called ‘Six Acts to reboot democracy’. People are invited to sign up and vote for or against the proposals shown there, or to make their own proposals for democratic reform. When I first looked, there were 33 such proposals; none of them mentioned animals. I have therefore posted a proposal titled ‘Representation of Animals Act’. Please go there and vote for it, if you have time: when I last looked (it’s near the bottom of the page), it had received a total of one negative vote.

The title-phrase comes from a speech of the Irish nationalist politician Charles Parnell, given in 1885: “No man has the right to fix the boundary of the march of a nation; no man has a right to say to his country – thus far shalt thou go and no further.”

The Official Animal Rights March (TOARM) facebook page is here: https://www.facebook.com/events/achilles-way-london-w1k-1ab-united-kingdom/the-official-animal-rights-march-2019-london/615721232212726/  There have been/will be related marches at about this time in many other cities round the world. TOARM was founded by the organisation called Surge in 2016. Last year’s London march was described in this blog on 3 September 2018.

Prime Minister Lloyd George’s speech at the Paris Peace Conference was reported in the Times of 20 January 2019.

The publicized intention of Animal Rebellion in October is to blockade the meat market at Smithfield in London. Please visit its web-site at http://www.animalrebellion.org/

Robert Garner’s essay ‘Animals and Democratic Theory: beyond an Anthropocentric Account’ was published in Contemporary Political Theory, vol.16.4, 2016, pp.459-77. It can be read online here: https://www.readcube.com/articles/10.1057%2Fs41296-016-0072-0?author_access_token=xNdtWwORBPuYWYx0bHmbalxOt48VBPO10Uv7D6sAgHtNg344y2R29w6T1gh33kZDmAvHpritVE1zaVYYkHK2S22mn9e-UqOTAw2XrOTRE95RWBW9DCw6tbESCaRw05SaTD67RwZg3G8UgFwzYJmjrg==

The animal-theft petition and answer can be found here: https://petition.parliament.uk/petitions/244530?reveal_response=yes

Abraham Lincoln is quoted from his speech given at the Soldiers’ National Cemetery, Gettysburg, on 19 November 1863.

The Peterloo Memorial Campaign’s ‘Six Acts Project’ is online at https://www.sixacts.org/. Note: The VERO proposal for a Representation of Animals Act was in fact quietly deleted by the organisers soon after it was posted. When I asked why, I was eventually told bluntly that it did not constitute an improvement to democracy. There is, unfortunately, a tradition of contempt in socialist thinking for any concern about non-human animals: a tradition only, not a rationale, of course.