Today, 24 April, is World Day for Animals in Laboratories. It’s impossible to know even approximately how many animals are making this claim on our attention, because most of them are unrecorded. Even where there are official counts, the rules and standards differ. The U.S.A., for instance, does not include in its published figures any rats, mice, birds, or frogs – the most commonly used lab animals. Its last official total (767,622 in 2015) is therefore likely to have been about 1% of the true number. The most recent attempt to produce a reasoned estimate of the world total (a 2014 report commissioned by Lush Cosmetics) put it at over 118 million, but conceded that this was itself very probably much less than the truth.

At the head of that page, there is just the one pictured animal, the monkey as shown here, to represent those 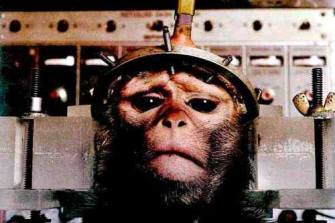 uncounted millions, but it’s the right one, as I shall say later. On Easter week-end, which is when I am writing this, the hideous contraption (I don’t know its technical name) which has been clamped to the monkey’s head appears like a stylized crown of thorns.

There’s unfortunately nothing far-fetched about such a comparison. In fact it was put to the congregation of the Oxford University Church long ago by one of the University’s most eloquent preachers and noblest men, John Henry Newman. At that time (early 1840s), he was vicar of that church and parish, as well as a university tutor. He was giving the Easter sermon, and he wished to persuade that congregation, largely consisting as it did (or so he was increasingly coming to feel) of over-comfortable and under-spiritual colleagues, to have a more living sense of “those awful sufferings whereby our salvation has been purchased”. He hoped to do this by inviting his listeners to recollect “how very horrible it is to read the accounts which sometimes meet us of cruelties exercised on brute animals”, and in particular those cruelties which were “the cold-blooded and calculating act of men of science, who make experiments on brute animals, perhaps merely from a sort of curiosity.” He pictured such an animal “fastened … pierced, gashed, and so left to linger out its life”. And he then asked, “Now do you not see that I have a reason for saying this, and am not using these distressing words for nothing? For what is this but the very cruelty inflicted upon our Lord?”

So it was as a sort of moral exercise that Newman first invoked those images of animal suffering, as a practice in sympathy, but also and expressly he was gripped by the images in themselves, and he used words for them as strong as a Christian could find: “there is something so very dreadful, so Satanic, in tormenting those who have never harmed us, and who cannot defend themselves, who are utterly in our power.” Satanic! This meant something shocking at that time, addressed to a congregation in which almost all must have been earnest believers, and many of the men in holy orders themselves (as college fellows commonly were). Newman was shifting the matter from the realm of personal sensibility (“horrible to read … distressing”), and into eschatology: death, judgement, heaven and hell. He could not at that time have condemned vivisection more absolutely or more permanently.

Soon after that, Newman left Oxford, exiled by his decision to be ordained into the Roman Catholic Church. And subsequently the religious preoccupations which so vitally engaged him and others during the nineteenth century have ebbed away, from Oxford University and elsewhere. The meaning which the pictured monkey holds for humanity and our self-explanation, in its character as our forebear, probably commands now a larger congregation than the meaning of Easter does, supposing that they have to be at odds. At any rate, the idea that Christ’s sufferings, real and terrible as they historically were, constituted a sacrifice ‘purchasing our salvation’ is a hard one to accommodate in science-minded western culture. Still, as the picture of the monkey shows, we’re not done with sacrificing as a principle. Indeed, George Bernard Shaw believed that a primitive trust in propitiatory sacrifice was what really persuaded the modern public of the efficacy of vivisection, in so far as it was persuaded.

But there’s more to the comparison than just that ancient habit of making others pay our debts. When we see another species of primate, we get as near as we may to looking at our own genesis. Ecce homo, in fact (the Latin version of words ascribed to Pontius Pilate: see the note below). The last lines of Karen Joy Fowler’s novel We Are All Completely Beside Ourselves (discussed in the post for 10 September 2015), record the narrator’s encounter with a confined chimpanzee, bullet-proof glass between them: “I recognized everything about her … As if I were looking in a mirror.” But we have heard from this woman’s brother that such recognition is only the start in finding who we really are. Referring to the absurdly over-rated ‘mirror test’ for animal self-consciousness (essentially a test of human-likeness), he has told her, “We need a sort of reverse mirror test. Some way to identify those species smart enough to see themselves when they look at someone else. Bonus points for how far out the chain you can go. Double points for those who get all the way to insects.” So other primates are the go-betweens, who both are and show our relation to all the other animals beyond themselves, and therefore to life itself. In putting them to death in this way, we offend against life our own maker, and, as children of nature not God, we condemn ourselves with no means of forgiveness. This is the story that the monkey photograph tells.

If you can, be in Birmingham on Saturday and speak up for the equal holiness, beauty, and right to freedom of all life.

World Day for Animals in Laboratories was instituted in 1979, the particular date being the birthday of Hugh Lord Dowding, whose work for animals is discussed in the post for 26 June, at https://voiceforethicalresearchatoxford.wordpress.com/2016/06/26/a-servant-of-the-state-of-nature/

The Lush report can be read here: http://lushprize.org/wp-content/uploads/Global_View_of-Animal_Experiments_2014.pdf

Newman’s sermon ‘The Crucifixion’ was collected in volume 7 of the eight-volume Parochial and Plain Sermons (quotations from pp.134-37 of the 1868 edition).

The painting is by Alberto Mantagna, dated 1500 and titled Ecce Homo. “Ecce homo!” is what Pilate exclaims when he presents Jesus to the crowd (in the Latin Vulgate translation of John 19.5). The common English version would be ‘Behold the man!’, but the Latin can equally mean ‘Behold mankind!’

I don’t know the source of the WDAIL photograph.